Tertius Clarens is a small-time choir singer who leads a shabby uneventful life with his girlfriend. Until one day, he is noticed by the star of the opera. She fancies him and later, when she hears him sing, she is convinced he has great talent.
She introduces him to the opera, where his skill and remarkably good voice quickly gain him fame and honors and he becomes a favorite singer at the opera.
The star, who fears that his talent and popularity will soon outshine hers, conspires to ruin him. Tertius is fired without notice and soon descends into a life of despair. Alcohol becomes his refuge and a small cabaret, his source of livelihood. Wearing a grotesque harlequin’s costume, he performs the song that had made him famous, in an act of self-mockery.
An unexpected encounter with the opera star, where Tertius manages to humiliate himself, makes him determined to turn his life around. He gives up drinking and finds work as a respectable choir singer and the occasional “extra” in musical productions.
Until one day, the leading male star of the opera falls ill and the agent, who still remembers Tertius’s good voice, suggests him as a substitute. The opera is “Carmen” and his part is of José. Tertius is to appear alongside the star who had betrayed him – she will be playing the part of Carmen.
On opening night, the last act comes to an end and the audience applauds enthusiastically. Tertius, who is then overcome by a sense of unrequited love, anger and revenge, draws a real dagger, stabs the star and then takes his own life on the open stage.

This song and the musical interludes were performed by Max Nivelli himself at the premiere and further screenings.

Dreams of Happiness (translated from German, the original German lyrics are in the Photo Gallery below)
Often, I’d assume I could never bear
that life makes me wait in line.
Sunny days were gone,
Only grey was my little world.
But from my distant childhood sounds,
a song my mother used to sing.
With slight happiness, she’d sing it, with deep sorrow.
But when she sang it, it sounded free.
≈
Refrain:
Dream, oh dream you human child,
dream yourself into happiness.
You know how fleeting it is and how it melts away.
Soon you’ll be poor and alone!
If it just smiles at you a little,
take it, just take it and appreciate it,
you’ll feel like a king in dreamland-
But you’re a fool, just a fool! –
≈
I learned about life, I learned about love,
that certainly brought me some happy times.
But with bitterness I had to realize:
Happiness is never complete in life.
Even though I’m surrounded by misery,
Before I let go of my burdens,
it seems to be a sacred command
that I gasp and strum the strings.
≈≈≈
(In German – Every other line rhymes) 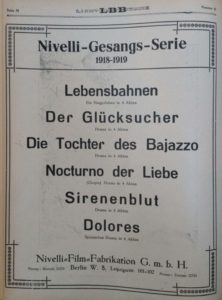 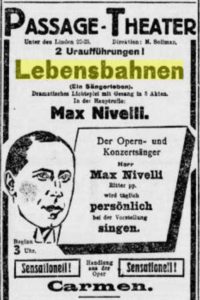 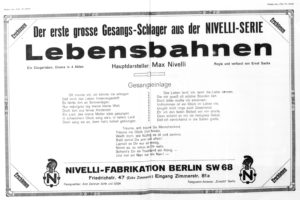