Max Nivelli was born to a Jewish family on January 1, 1878, as Menachem (Mendel) Lewin in Kuźnica, a small village in north-east Poland, then part of the Russian Empire.

His parents, Schmuel and Zipa (born Bytker), were candy manufacturers who owned a small business. Around 1880, they had their second child – a girl named Devorah. There are indications that there was a third child, David, but definite proof is yet to be found.

Looking for new opportunities, the family decided to move some 65 kilometers south-east of Kuźnica, to Vawkavysk in Belarus, then also in the Russian Empire. This was an up-and-coming industrial town and an important railway junction. Shmuel and Zipa established their candy manufacturing business there. In later years, their daughter Devorah would take over the business, expand it and become a successful business-woman in her own right.

Max, on the other hand, decided to find his destiny elsewhere. He had a passion for music and a good singing voice. By 1898, at the age of 20, he was already in Berlin, the capital of the German Empire, and the new economic and cultural center of Europe. His first few years in the city were marked by a rapid sequence of events. This pattern would continue for the rest of his life as he constantly evolved, looking for new challenges and opportunities. To financially support his budding singing career, he established several businesses, then became a full-time opera singer and music teacher and finally, dedicated his career to making films.

On May 5, 1904, Max Lewin married Helena Kaufmann, a young Jewish woman from Poland. They were both age 26 and at the time of the wedding were living together on Prinzenstrasse no. 97. Helena was born on Nov 23, 1878, to Leo Kaufmann and Rosalie (born Gottlieb). Her father was a successful manufacturer and merchant of women’s undergarments and the family lived in Rozdzien (now part of Katowice). Helena was the third child, with two elder brothers – Julius and Moritz, and a younger sister named Laura.

The young couple had their first daughter Dorothea (Thea) in 1904 and about two years later, on February 14, 1906, their second daughter Regina (Gina) was born.

In 1909, Max finally embarked on a full-time artistic path when he enrolled at the prestigious Stern Conservatory in Berlin. Upon graduation, he assumed the stage name “Nivelli”, which is almost an anagram of the name “Lewin”. Eventually, he performed in opera houses throughout Europe and worked as a singing teacher at a music school in Berlin. But then, he became fascinated by the developing art-form of cinema which was creating a buzz everywhere. By 1918, at the age of 40, his first film was already playing in cinemas all over Germany.

More on his career, in the “CAREER” pages.

Max was a popular figure in the artistic community – energetic and creative. His acquaintances described him as an idealist who believed in fighting for a world free from injustice and violence. In fact, many of his films reflect these beliefs. Max was also an avid card player and frequented the gambling clubs on the fashionable street of Kurfürstendamm in Berlin’s city center. He was struggling with a heart problem but still, smoked heavily.

Max and Helena kept a busy social life and often held musical soirees at their home. Helena was an outgoing and generous woman, so it seems that as a couple, they formed a good team. They had many friends from the business, music and film crowd in Berlin, some quite well known, such as:

The couple’s daughters, Thea and Gina, were not considered German citizens but “children of Russian parentage”, despite being born in Berlin. As such, they were not permitted to attend German schools and attended private lyceums. Music played an important role in the Nivelli household and the girls studied piano from an early age. Thea was an accomplished pianist and had special private lessons with well-known masters. Gina also developed other interests and when she grew up, she started working at her father’s film production company. There she met her future husband, Friedrich Wolfgang Schwarz – a Viennese musician who was making his first steps in Berlin as a pianist, accompanying the screening of silent films, including Nivelli’s.

Around 1920, life was good for the Nivelli family – they lived in a spacious apartment in the center of town and Max was investing his profits in the production of new films and also in patents, valuable furniture and jewelry. Filmmaking was a most lucrative business and some of Max’s friends in the movie business were urging him to join the trend and leave for Hollywood with them. But, following the “Titanic” disaster of 1921, he became afraid of sailing and the family stayed in Berlin.

By 1923, the Weimar Republic’s economy had deteriorated. The country was in a state of hyperinflation and strikes were rampant. Nivelli, like many others, failed to recognize the economic crisis in time and lost most of his money. Looking for other sources of income, Max switched from film production, which was a costly business, to importation and distribution of films.

This venture sustained him until 1925 when the economy was starting to stabilize – civil unrest decreased and growth was in the air. Max established a new film production company and decided to start small. The plan was to re-issue an earlier successful film with some changes, something which did not require a large investment. The project looked promising and shooting of the new scenes was already underway.

Unfortunately, Nivelli’s health was deteriorating – he already had heart problems, and the financial stress of recent years must have also taken its toll. The circumstances of his death were reported in detail – on the evening of February 27, 1926, Max was playing the Écarté game of cards with a partner, in one of his usual clubs on Kurfürstendamm street. The game was full of suspense and at a crucial point just past 11 PM, when Max was a step away from winning, he suddenly collapsed. Two doctors who were at the club came to his aid but he soon lost consciousness. His death was pronounced shortly after. He was 48 years old at the time.

This obituary was published in one of the film magazines:

“It is our sad duty to announce the death caused by heart disease of Max Nivelli. For 12 years he belonged to the trade and was consecutively producer, importer and distributor. His exceptional faculties and his continual flow of new ideas and possibilities made him a general favorite. We deplore his death sincerely”. The Film Magazine (No. 10), March 7, 1926

Max Nivelli was buried at the Jewish cemetery in Wißenssee, Berlin, on March 3, 1926. 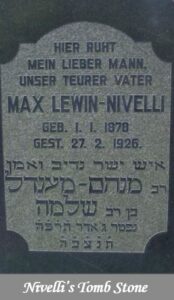 Shortly after Max’s death, the shooting of his last film “Unity, Law and Freedom” (Einigkeit und Recht und Freiheit, 1926) ended. His partner, Dr. Sander Kaisermann, began proceedings to dissolve the Nivelli production company. This was concluded in 1927 and later on, Helena Nivelli-Kaufmann was declared heir to her husband’s estate.

The family remained in Berlin. Thea got married in 1928 to Karl Giesen and they both had a son, Max. In January 1939, when conditions for Jews had deteriorated further, they left Germany for Buenos Aires, Argentina. Gina, as mentioned earlier, married Friedrich Schwarz in 1932. By then, he was already a successful songwriter, whose music could be heard in all the major clubs in Berlin. Barely a year had passed, when he unexpectedly died in Paris in mysterious circumstances. In 1935, Gina settled in London and embarked on a long and frustrating battle to obtain the copyrights to her husband’s music, a battle which was largely unsuccessful. Under her father’s stage name, as Gina Nivelli, she composed music and her name is credited on numerous songs and music scores. In 1938 she also published a book, “The Primrose Path”. She never remarried. Her mother, Helena, joined her in London just before the outbreak of WWII, where she passed away in 1944.