The Battle of Tannenberg was held at the very beginning of WWI, between 26-30 of August 1914, in which the German army under General Hindenburg stopped the advancing Russian army.

The battle was actually fought near Allenstein (now Olsztyn, Poland) however, Hindenburg urged to name it after the town of Tannenberg (30 km to the west), in order to “erase” the memory of Germany’s defeat in this place in the 15th century (Battle of Grunwald).

Two separate celebrations for the 10th anniversary of the battle were held. One was the laying of the cornerstone to the memorial in Tannenberg. The second, was a ceremony held on August 23, 1924, in the town of Königsberg (now Kaliningrad), about 200km to the north in the province of East Prussia.

This short documentary portrayed the ceremony at Königsberg and several sporting events while showing prominent locations in the area, as follows: 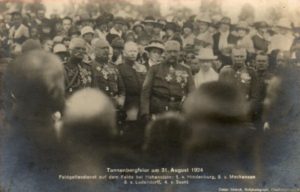