Max Nivelli’s debut into the world of cinema in 1917 occurred as the new industry and art-form were gaining momentum. Films had moved from being a novelty show to an established large-scale entertainment industry – in 1906, the first dedicated movie-theater in Germany was opened, and by 1910 there were over a thousand operating in Germany. This was the beginning of what is known as the “Golden Age” of German cinema, when many of the iconic films of that creative era were made.

While WWI was still raging, the German film industry was protected by a ban on foreign 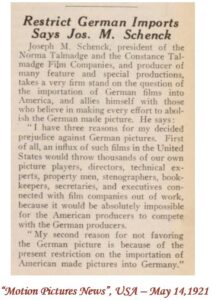 film’s import. However, once the war was over in 1918, the tables turned – it now had to face an embargo which was placed by some of the allied countries on its own films, and audiences themselves were resisting anything that was “German”. As the ban was gradually being lifted, the German film industry was preparing itself to compete in the international film market, but restrictions were still enforced in some countries.

During the 15 years of the Weimar Republic (1918-1933), this emerging industry had to confront many challenges, mainly economic and technological, but also social and political. When Max Nivelli decided to become a film producer, these were issues he had to deal with, and when we review his 10 years in the business, we can clearly recognize how this effort was reflected in his work.