The concept of “Auteur” (French: author) commonly refers to a filmmaker whose personal influence and artistic control over a movie are so great, that he is regarded as the author of the movie (equivalent to an author of a novel or a play). His films have a recognizable style and tend to focus on a certain theme. Nowadays, a film is considered to be mainly the product of the director’s vision. This approach has been developing since the late 1940’s, which suggests that it is the director who applies a highly centralized and subjective control to many aspects of the film, in other words – it is the director who is responsible for the final product, and others who contributed in the making of the film, are mere apprentices.

Through the years, film historians, film critics and people from within the industry, have been arguing about the validity of this concept. Such was the view of film 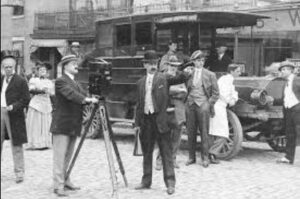 historian Georges Sadoul who claimed that the main creative force in the making of a film is not necessarily the director, but can be the lead actor, screenwriter, producer, or even the author of the original story (in case of literary adaptations). Journalist and film historian Aljean Harmetz, argued that the auteur theory “collapses against the reality of the studio system” because under this system in classical Hollywood, the creative input of producers and studio executives exceeded in many cases that of the directors.

When looking at Nivelli’s film career, I am suggesting that he can clearly be regarded as the “auteur” of his films. He was first and foremost an artist and when he became a film producer, cinema was the medium through which he could fulfill his vision and promote his ideas. In all his films we find recurring themes such as – the love of music and its power to shape people’s lives, the importance of tolerance, and the strive for a better world, free from hatred and conflict. These ideals were his obsessions and he realized them in his films.