Diversity in Film Types – The Birth of “Film Genres”

Weimar cinema is usually associated with the term of “expressionism” – a renowned movement in art. It developed in Germany at the beginning of the 20th century and 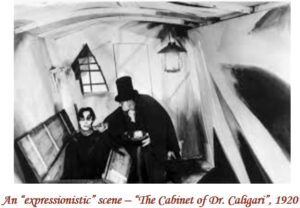 placed the inner perspective of the artist at the center of his art. Attention was placed on subjective emotions, as opposed to objective observations, which were a trait of “impressionism”. The goal was to invoke moods, usually negative ones, such as: despair, anxiety and pain. Films of the “expressionist” genre, explored the dark side of human nature using nightmarish styles, distorted design and exaggerated sets. These were considered the “artistic” films of their time.

However, this was by no means the dominant genre. The reality for the average German was dark enough and cinema was an escape from the hardship of everyday life. So, when it came to spending money on entertainment, the masses were voting with their feet, preferring a more upbeat variety. The smaller production companies, such as Nivelli’s, which could not afford a single flop, had to appeal to the mass audience in order to maximize their profits. They did so with great success. 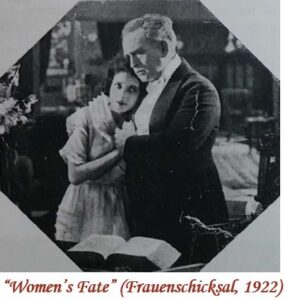 Nivelli practiced this approach and most of his films belonged to the popular genres. His first 7 films were all romantic melodramas interlaced with a musical theme, whereby he also fulfilled his passion for music. This genre was particularly popular with women who were more than half of film audiences at the time, and so it was important for filmmakers to satisfy their perceived taste.

In 1919 Nivelli embarked on a project that would become one of the two-most-important films of his career – “The Outcasts”, or in its alternative name “The Ritual Murder” (Die Geächteten / Der Rirualmord 1919). The film was marketed as a social or “enlightenment 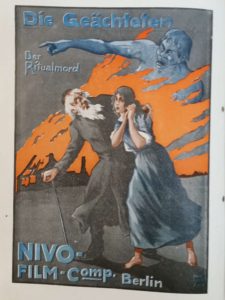 film” (Aufklärungsfilm). This genre demonstrated the development of German cinema as an important and vibrant arena for the introduction of controversial issues, both social and political. The plot of “The Outcasts” recounted a violent attack against Jews (“Pogrom“) in a village in Tsarist Russia. The trigger for the assault was the disappearance of a little girl and the rumors which followed, that she had been a victim of ritual murder performed by the Jews. Following WWI, a surge in Anti-Semitism and xenophobia spread across Germany, when Jewish immigration from the east increased and the term “Jewish question” (die Judenfrage) became a popular topic. Like many of his colleagues in the film industry, Nivelli was a Jewish immigrant. He saw it as his mission to educate the public to be more tolerant. Not surprisingly, he not only produced this film, but was said to be a driving force and a dominant element in the final product. This film made him among the first to raise the issue of anti-Semitism in cinema-form.

A year later, Nivelli continued with a contemporary social and political theme. The film “Humanity Unleashed” (Die entfesselte Menschheit 1920) was a political melodrama. It was a fictional account of the events of January 1919 in Berlin, the so-called “Spartacist Uprising”, when a general strike was declared, accompanied by some armed battles in the streets. Germany was in the middle of a post-war revolution, and the uprising was primarily a power struggle between the moderate democratic party and the radical communists. The revolt was improvised, on a small-scale, and was quickly crushed by the superior firepower of government troops. Nevertheless, it reflected the growing fear among the German public of political radicalization. This fear resonated in the film, which portrayed a group of workers who launch a violent rebellion in an attempt to destroy the existing order. Their actions trigger chaos and deteriorate to the verge of civil war. In order to spice things up, a sub-plot of seduction and betrayal was added which naturally contributed to the film’s popularity. 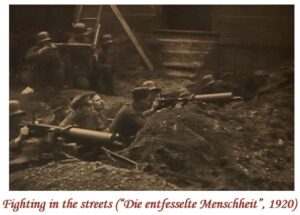 The changing cultural climate in Germany and the shift towards realism and social criticism, brought about a new movement in art – the “New Objectivity” (Neue Sachlichkeit). In cinema it took different forms. One film genre which was associated with this movement was “street films”, sometimes referred to as “asphalt films” that started appearing around 1925. In such films, characters from sheltered middle-class backgrounds were suddenly exposed to the reality of the big city, where they encountered various 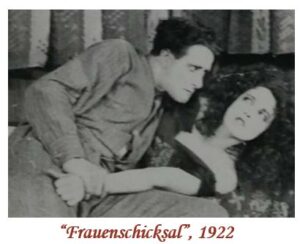 forms of social deviance such as gamblers, prostitutes, black marketeers and con-men. But, as early as 1922 in Nivelli’s film “Women’s Fate” (Frauenschicksal 1922), one can already find elements that later would be identified with this genre. In this film, a young woman from a respectable background struggles to break free from a life of crime and violence. In the promotional material, Nivo-Film described the storyline as “the suffering of the heroine, as an example of the hardships women have to endure daily and even hourly all over the world”.